Its special location along the coast, on a sheer cliff overlooking the sea, has kept Grotta del Fico hidden for thousands of years.

An eclectic character, an extraordinary curiosity were indispensable, to go beyond those limestone pillars and rock walls that separate the cave from the rest of the mountain. Siu Antioglu Morette was the right person at the right time. He was a shepherd from Baunei, he used to hang around the Grotta del Fico with his goats and he knew every single stone of the area. One day, during his explorations, he managed ticlimb the cliff and go around the corner, finally discovering a huge dark hole and going inside.

Imagine the emotion, during those first exploration moments at the light of a wooden torch!

The first professional speleologists reached Grotta del Fico in 1957: it was the Sardinian Gruppo Speleologico Pio XI. Among expedition members there was the Sardinian writer Marcello Serra, who describes the cave with these words:

The Cave we are about to explore doesn’t have a name yet. We would like to name it “Grotta del Castello” (Cave of the Castle), because of its majestic appearance, in a huge cliff overlooking the sea.

Following the main gallery, they finally reached a 40 m deep pit which lead down to a sump connecting the cave with the sea. Down there, swimming in the water of that sump, cavers found what they were probably looking for. While men were going down with ropes, gently touching the rocks with their feet, the silence was broken by a dive on water and some special animal calls: 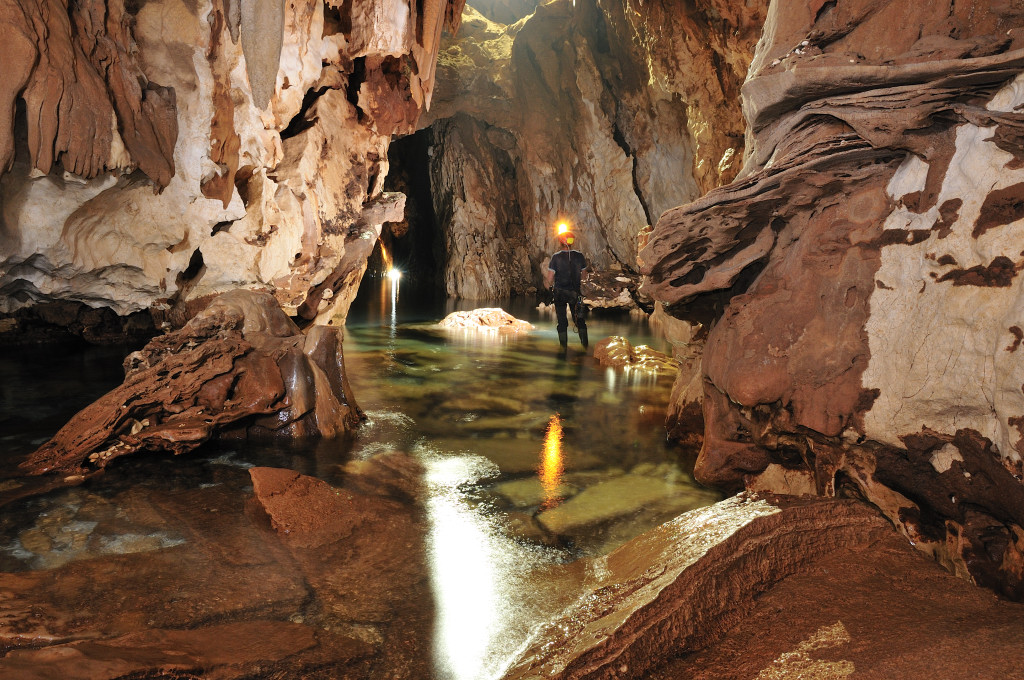 The sump of the Monk Seals

And ideeed, at that time, many specimen of Mediterranean Monk Seal (Monachus Monachus) were still living along the Coast of Baunei. To protect those beautiful shy animals, a cage was installed at the entrance of the cave, which remained closed for the next 30 years.

Then, at the beginning of the 2000s, a group of young speleologists decided to take the lead: they founded the Società Speleologica Baunese in order to take care of Grotta del Fico, built a system of boardwalks, modern and safe, studied a guided tour and brought the light inside one of the most beautiful caves in Sardinia, finally open for everybody!